In 2018, Debra moved into a 3 bedroom condo in Mississauga that has beautiful views of Lake Ontario. But in early 2019, her sister developed terminal cancer and she decided to move back to Oshawa to help support her.

Instead of making a quick decision to sell the condo, Debra decided to rent it out for a year.  She was not sure if she was going to stay in Oshawa, or move back to her condo.  She did not realize that her decision to rent out her condo would be an emotional roller coaster ride.

Debra used a real estate agent to help find tenants for her. A family that were Syrian refugees needed home at the time and she thought that this was a perfect opportunity to give a family a second chance. Debra accepted them as tenants and signed a lease for February 1, 2019.

She knew that there was a very good possibility that she would be selling the condo in a year’s time, so she told the family what her intentions were. She didn’t want to put them in an awkward situation later on and wanted to be upfront.

There were the typical issues that come up from renting properties. A freezer that stopped working and a dishwasher that needed to be repaired. She worked with the tenants and was able to address the issues.  She did an inspection in June 2019, and found the tenants kept the place well.

The problem started when she let the tenants know in October that she would be selling the condo when their lease was to expire at the end of January. This being her primary residence, she didn’t know the formal documentation that was required to give tenants a notice to end the tenancy.

So she wrote a letter to the tenants letting them know that she was intending to sell the condominium on January 31, 2020 and didn’t intend to renew the lease. The tenants wrote back in November, that they had talked to a lawyer and that the letter was an unacceptable notice to end the tenancy.  If she wanted to end the tenancy she would need to sell the property.

On November 21, 2019 the property was listed.  Debra had one showing booked, after some back and forth with the tenant she was able to get the potential buyer and agent into the unit.  By November 26, she had an accepted offer on the property for a closing date of February 3, 2020.

Once Debra realized that there was an accepted offer and understood that the buyers wanted to move in, she completed an N12 (Eviction for Personal Use, Demolition, Repairs and Conversion) on her way to do an inspection of the property.  She had served the N12 to the tenants by leaving the document on their coffee table.  Debra didn’t realize at the time that this was a problem with how she had served the document, as well as dating the N 12 document.  Debra incorrectly signed the document, and dated it as November 26, 2020, as she was in a rush.

In early January Debra received a message from the tenants that they would not be leaving. So she filed an L2 (Application to End a Tenancy and Evict a Tenant) with the Landlord Tenant on January 6. Debra was shocked and dismayed that she received a date of 84 days later on April 1, 2020 for her hearing.

Deborah had the documents reviewed by a paralegal and through the discussion realized that she needed to refile the application and reserve the documents appropriately. On March 19, she refiled the N12, which gave the date of May 31, 2020. Through her lawyer she offered a financial incentive for the tenants to leave. The tenants initially agreed to the cash incentive but were unable to locate a new property to move into.

The tenants stopped paying rent in April and have accumulated rent arrears of approximately $9000. Debra is hoping that the tenants will leave at the end of June, but with the landlord tenant board only doing hearings in specific instances and the initial delays in getting hearing dates, she is upset about the delays.

When asked what Debra had learned from the situation she shared a few pieces of advice for future landlords.

Number one: “I was naïve. I was surprised by the lack of control that I had of a property where I am on title and stuck with all the bills.” She warns other people who are considering renting their personal residence to think again. Debra suggests that “people should be very careful if they are going to rent out their personal property and treat it like a business.”

Number two: “Remember, that all the documentation that you serve tenants, tells them that they don’t have to leave if they don’t agree with it.”  “You need to keep that in mind when you’re making any decisions.”

Number three: “Don’t rent your home, there is a much more emotional connection to it and you are putting yourself in the difficult position.”

Number four: Make sure that you understand the documentation and that you are sending to your tenants.  Double check the dates and understand how you can serve those documents correctly.

Unfortunately the situation has gotten a lot worse for Debra because of her inability to collect rents and because of mounting debt, she has been forced to move into a trailer on her mother’s driveway in Oshawa. Debra is shocked at the lack of control that owners have their properties once they have been rented and dismayed at how the system seems to have been stacked against her.

Epilogue and a Happy Ending

On June 30th 2020 the tenants finally vacated the property, with a little more drama.  There were only a few repairs to do in the bathroom, and the property has been listed for sale on the MLS.  Debra is excited and relived, as there has been a lot of interest in her property, and looking forward to moving on with her life. 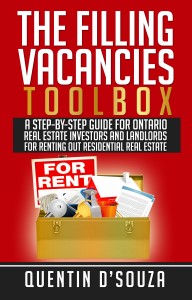